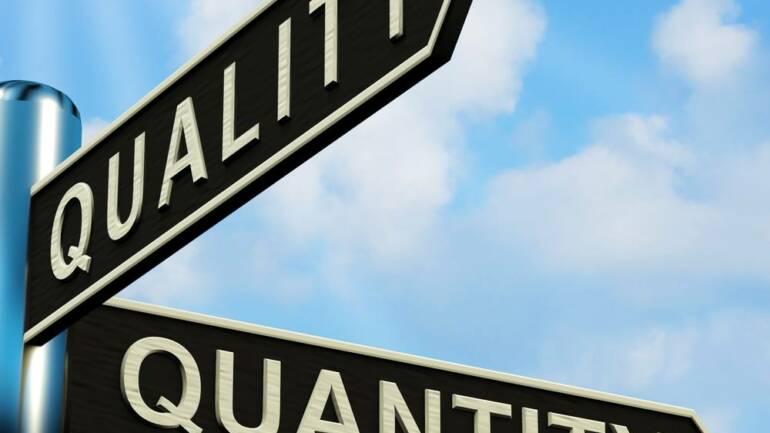 The myth about Quality or Quantity ~ Pastor Poju Oyemade

The myth about Quality or Quantity.

A myth can be defined as a widely held but false idea which most of the time was developed to explain away certain things without doing honest intellectual work.

There is this concept in ministry which prevails giving the impression that large ministries or Churches that have a bias to growth have compromised the message and jettisoned the idea of building quality Christians for numbers. They almost set quality and quantity on opposing sides like it is a battle between both where you cannot have both, you have got to choose.

It’s only when we wear our religious cap we begin thinking this way. In no other industry are these in opposition. We will agree that if a model of a certain car performs well, it will gain traction and sell. We agree that very good phones, high in quality will be sold in large quantities globally. Why then do we believe a man who teaches right and solid stuff in his/her ministry will not gain traction?

It is true those who have discovered that God meets with man at the point of His need to reveal Himself and not through theories about him have manipulated people using their needs as a point of contact to bait them.

However a ministry that deliberately receives the supply of the Spirit for the purpose of meeting peoples needs through the preaching and teaching of the word of God will experience a quantitative exponential increase.

Quantity and quality are not at war they co-habit. Scripture proves this. Even John the Baptist who came with a fiery message on repentance from sin had multitudes including the sinners running to him from every corner. It was until Christ came the multitudes moved from him.

Luke 3:7-8
7 Then said he to the multitude that came forth to be baptized of him, O generation of vipers, who hath warned you to flee from the wrath to come?
8 Bring forth, therefore, fruits worthy of repentance, and begin not to say within yourselves, We have Abraham to our father: for I say unto you, That God is able of these stones to raise up children unto Abraham.

Was Christ also teaching fake stuff when the Bible said multitudes allowed Him to hear and to be healed? Where it describes them as pressing upon Him to hear the word?

Let’s get this clear, multitudes are suffering out there, struggling to make sense of their experiences, carrying burdens and pain beyond their measure. Any ministry that tunes itself to meeting these needs through the anointing of the Spirit and by the teaching of the word, relevant to the lives of the people will experience growth.

Always remember the anointing is not to impress your converted friends about your personal depth but to meet the needs of a dying world. This has and will always be the reason we are anointed, to supernaturally intervene into human affairs with the power of God.

Isaiah 61:1
The Spirit of the Lord God is upon me; because the Lord hath anointed me to preach good tidings unto the meek; he hath sent me to bind up the brokenhearted, to proclaim liberty to the captives, and the opening of the prison to them that are bound.

To a young minister out there, don’t let them “sell” you any false mindset as you step into ministry that will have to choose between quality and quantity. You can and will have both.