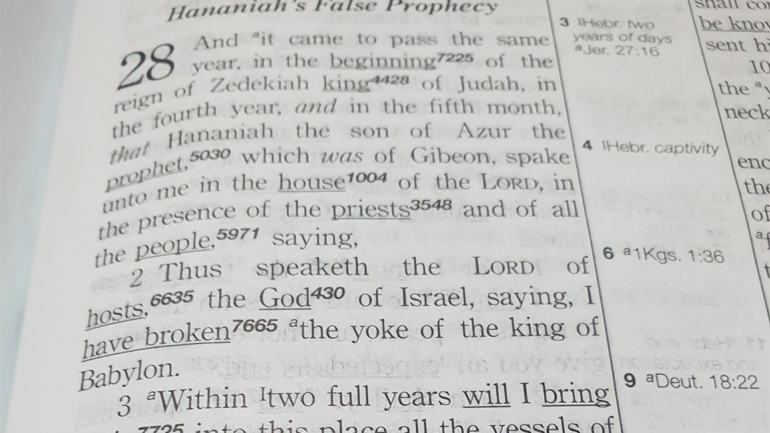 In the book of Jeremiah, we have a story of two prophets, Jeremiah and Hananiah. God had earlier spoken by Jeremiah concerning the consequences of the sins of Israel. He said they will be 70 years in bondage in Babylon. Hananiah later comes on the scene with a pseudo prophetic utterance that was very appealing but really worsened the situation for the Israelites. He declared that they will not spend 70 years but just 2 years in bondage after which their great God will deliver them. Hananiah was even dramatic he went and demonstrated the breaking of the yoke, acting it out as he prophesied.

Obviously, 2 years in bondage sounds more appealing than 70 years. Everyone must have rejoiced and shouted at the words of Hananiah over and against Jeremiah. You know how you sit and listen to a message highly applauded but it is nothing more than psyching people.

It must have been like “Yes this is the true word that shows God works miracles” however, the prophecy of Hananiah simply worsened the situation. Jeremiah announced in reply you have broken the yoke of wood and replaced it with iron over the neck of the Israelites.

Why was this so? Because a false expectation of quick victory had been created and they were expecting to be back home in 2 years. Now Jeremiah knew this will lead to deep disappointment and broken hearts making the 70 years now look much longer than it really is so in effect the false prophecy may have done “good” momentarily but ultimately it was going to bring great damage.

It is like a doctor administering pain killers to relieve the pain without dealing with the root cause of the ailment in the first place. To this God asked, Is there no balm in Gilead, why are my people not recovering from their wounds.

Jeremiah 8:22 “Is there no balm in Gilead; is there no physician there? why then is not the health of the daughter of my people recovered?”

The reason for no complete healing and restoration was the false prophecies being given about complete recovery without going through the process ordained by God to deal with the root cause.

Jeremiah 8:11 “For they have healed the hurt of the daughter of my people slightly, saying, Peace, peace; when there is no peace.”

It is time to get to the root of our social ills, and deterioration of things by teaching how true reformation occurs rather than succumbing to the delusion of prophecies that circumvent God’s ordained process for change.